The Making Of The "Step Off The Ledge" E.P. 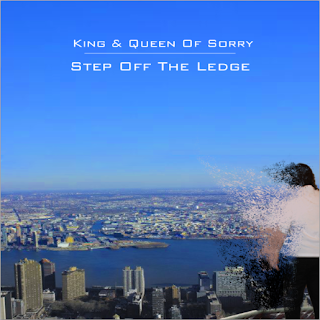 Perhaps I should start off with a little history lesson.  I'm from a small town in South Wales called Abergavenny. It's a friendly little place where, when you walk down the High Street, you'll probably find yourself saying "hello" many, many times.  My wife (when she first visited) found it hilarious that I knew everyone.  So what's a teenager from a small town to do? The answer, my friends, is to join a rock & roll band.

I'm aware that in most places, there's a rivalry between different bands, but things work a little differently in Abergavenny.  People who played instruments got together as friends, & often had jams with people in other bands.  This is largely how I came to know Kathryn - she always had a fantastic voice & we became good friends. However, people move away & times change, & as such, we lost touch for many years. We got back in touch (as most people do with old friends) through social media networks.

So a few years back, I turned 40.  To celebrate this, I decided to hire a recording studio for the day & invite 8 of my old musician buddies to come along & record some tracks.  I figured that if it went well we'd have some music to remember the day by, & if it didn't - well I would have met up with some old pals & had a laugh.  I asked Kathryn if she would like to come & sing on one of the 2 songs we were going to tackle.  I think she was a little reticent at the idea initially, as she hadn't sung for a few years, but agreed to come & give it a whirl.  She sang brilliantly from the first take & I was delighted (as was everybody there) with the results.

After that, we kept in touch & occasionally I'd send her songs I'd written with the intention of doing another studio day as before. With so many people involved however, it was nigh on impossible to get everyone together, & several planned studio days fell through.  Kathryn & her lovely family were coming down to stay for a weekend, so I thought what the heck, I'll record some acoustic song sketches to work on while she was with me.  The result of this initial get together was Open Door, track 3 on the E.P.

I'll admit to being a complete Luddite when it comes to technology, so when it came to mixing & production, frankly I was dumbfounded.  I put the initial unmixed track on facebook to see what reaction we'd get. Jan Buchholz, who I'd met via the Six String Bliss guitar forum, kindly offered to have a go at mixing the track. With the addition of piano by my great friend Giz Davies, we were overjoyed with the results and asked Jan if he'd lend his skills to producing a few more tracks for us.  We were very grateful that he said yes.

The initial success of that first recording process spurred us on to want to record more tracks, so we arranged another weekend stay for Kathryn & her family at my house.  This time we recorded 3 tracks - enough for an E.P.  Again, on one track we utilised the multi-faceted talents of Giz Davies to add some strings & piano, but the rest is my guitar & K's beautiful voice only.

Would you like to know the worst thing about being in a band?  It's not money squabbles or "musical direction", its agreeing on a sodding band name! We would agree we both liked a name, only to find it already taken by another band.  Both Kathryn & I apologise way too much and too often - hence her commenting once that we were the "king & queen of sorry".  We though that was a cool name which aptly described us! The artwork was done by Josh Greeves - a very talented young artist who has done an excellent job.

So, in signing off, I'd like to thank a few people.  Kathryn, thank you for lending your wonderful voice to my half-arsed songs, & making them sound better than they have any right to.  Giz - your help on those 2 tracks has really made them sound ace.  Cheers mate. Jan, thank you for your infinite patience with us - you have really done a very high quality job & we count ourselves very lucky that you agreed to work with us.  Josh - thank you for your time & effort too.  It does not go unappreciated.

If you want to listen to the tracks & get more information, go to

For downloads, free or paid (its up to you!) visit

I've started work on the next batch of tracks - so - as they say in all the best thrillers - to be continued...